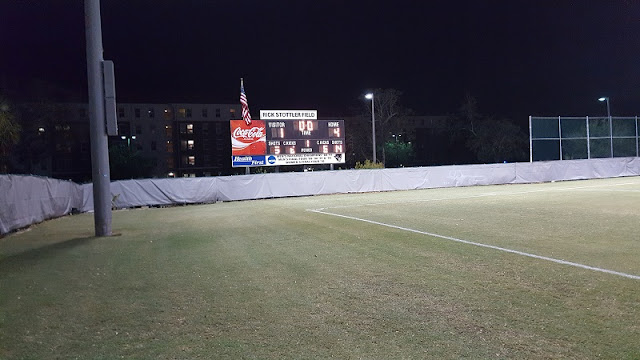 The wait was worth it for the Florida Tech Panthers, who opened their home season on Wednesday night with a 4-1 win over the Lynn Fighting Knights at Rick Stottler Field.
Maria Munoz was the star of the night, scoring a hat trick. She took five shots on goal, scoring three times and now has four goals on the season.
“She played a great game and struck the ball very well,” said Panthers coach Dustin Smith. “There were some clean shots and clean opportunities and I’m proud of her.”
Lynn got the upper-hand early, with a goal off the foot of Donish Henry-Cole, who beat Karlyn Prisco with 39:43 left in the first half.
“Lynn came out and did pretty well in trying to assert themselves and be aggressive, I think that’s why they scored early,” said Smith. “They were pushing us, they were being physical, all in a legal way and they caught us off guard and deserved the goal to go up one-nil.”
Just over 12 minutes later, Munoz got the Panthers on the board, beating Alexa Downie and tying the game at one. The offense was sparked by that goal, as they dominated the possession and kept Downie busy for the rest of the half.
“We are a possession-oriented type team,” Smith said. “I think we will possess the ball a lot in a lot of games because that’s the way we’re built.”
“It took a little bit for us to wake up in my opinion,” he continued. “Once we woke up I think we started to assert ourselves more than we did and we were fortunate to get four unanswered goals”
With 9:12 to go in the half, Munoz struck again to put the Panthers up 2-1. They would go up 3-1 with 2:17 left in the half, off a corner kick from Brie Heitz. She found Brittany Etrick in the box and Etrick headed it past Downie, giving the Panthers a convincing 3-1 lead, going into the half.
Florida Tech fired nine shots on goal in the first half and had four corners. Lynn managed just three shots and two corners.

Much like the first half, the Panthers dominated the possession for much of the second half. Munoz put the icing on the cake with 18:17 left in the contest, as she played ping pong with the goal posts before the ball found its way in to make it 4-1. With that, she finished off her hat trick and gave the Panthers the victory.

“It’s always great to win at home and we appreciate the support,” Smith said. “It’s always good when they show up for everybody.”
For more info: Lynn @ Florida Tech Box Score
Prisco ended the night with three saves. Downie did her best to keep her team in the game, with eight saves.
Smith said there is still plenty the team has to work on, especially defensively, but he was pretty pleased with the squads’ overall effort on Wednesday.
The Panthers are now 3-1-1 overall and will open their Sunshine State Conference schedule at home against Eckerd College on Saturday at 7:00 p.m.