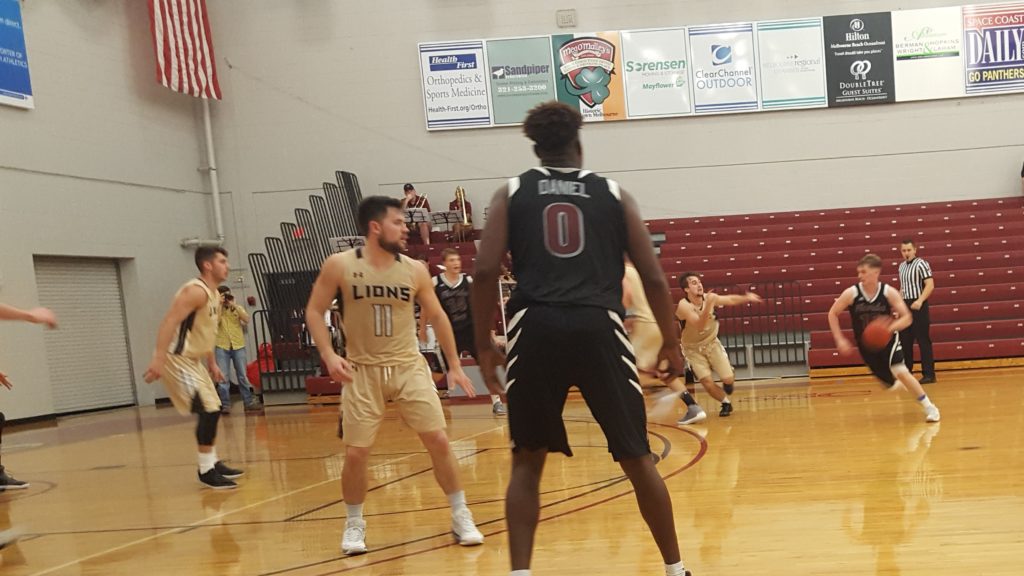 The Florida Tech men’s basketball team dropped to 0-4 on the young season, following Saturday’s 76-66 loss in the home-opener to Lindenwood in a non-conference meeting at the Clemente Center.

Sam Daniel, who came into the game tied for second in the Sunshine State Conference in scoring at 28.3 points per game, did nothing to hurt that average with his 33-point effort, including 6-for-13 from three-point range. He came into Saturday’s contest, already leading the conference with 17 made threes. He added 10 rebounds Saturday as well, notching another double-double. Richard Coil finished with 10 rebounds and two points.

Teammate Jordan Majors scored 19 in a losing cause Saturday, joining Daniel as the only Panther in double figures. Michael Milligan chipped in with five.

“Sam and Jordan were great tonight and I thought R.J. was great on the glass,” said Panthers head coach Billy Mims. “He’s averaging 9.3 boards a game and got another 10 tonight. I would like to see more offense out of him, we need him to get more aggressive and get to the basket.”

Valur Valsson had eight assists and three steals to go with his four points. “From a point guard that’s good basketball Mims said. “We’re just not getting a lot of firepower. Outside of Sam and Jordan, where did we score any points. I’ve got five, four, three and two from four other guys.”

The Panthers got off to a good start with Daniel and Majors hitting a few early threes and helping the home team jump out to a 13-7 lead with 14:21 remaining in the first half. The start could’ve been even better, but the Panthers were missing in close, coming up empty on layups and short jumpers during that span.

Daniel finished the first half with 20 points on 7-of-12 shooting. He was 4-of-6 from downtown and had six rebounds and one steal. Majors finished the half with nine points.

Majors started the second half with a game-tying three, but then the wheels came off for a stretch, as the Lions went on a 9-0 run, broken by a Michael Milligan three-pointer with 13:37 to go, cutting the Lindenwood lead to 46-40. It only temporarily stopped the Lindenwood momentum, as they reeled off another 13 straight points, capped by a TJ Crockett three.

It was fitting the game ended at the charity stripe, because the officials were very generous to the Lions, who shot 21 free-throws, compared to the Panthers nine. Majors and Daniel both fouled out late, adding to the Panthers woes.

“Preparing for this game I knew they were going to play physical man-to-man throughout the game, while we played zone, said Mims. “We shot a lot of free-throws in practice this week, because generally when you play a team that is all man-to-man and they’re physical and bumping you, you figure to shoot a lot of free-throws. It was just a little strange for me that the team that played zone put the opposition on the line 21 times and the team that played man put the opposition on only nine times.”

The Panthers are still dealing with injuries to Derek Murphy and Antonis Pefanis, among others and there is no timetable for their return, as well as the issue with Patrick Anderson, which Mims said last week will keep him out until at least December.

Mims wasn’t using that as an excuse by any means but said that this was the best team they’ve played all year and the Lions were at full strength. “We competed, we had a lead early and we dug a hole and fought back,” Mims said. “No matter what we’re facing or the hurdles in front of us, we’ve fought back in every game this year. This team has heart and once these young kids mature, in January and February that will be key.”

The Panthers will look to get in the win column Tuesday when they host Johnson & Wales in another non-conference tilt.  The game will start at 7:00 p.m. at the Clemente Center.