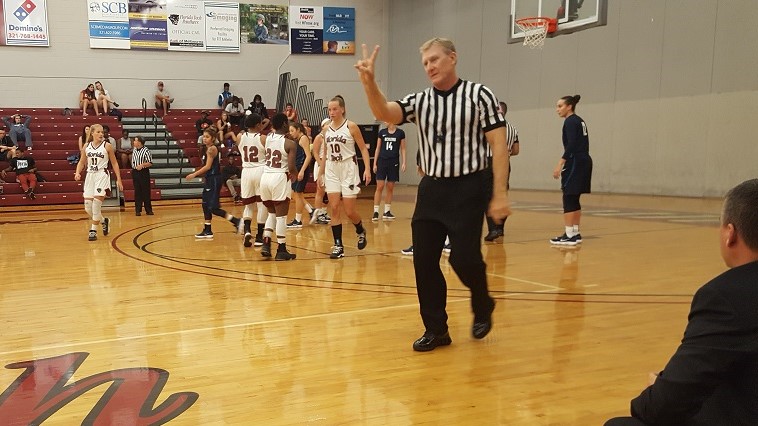 The Florida Tech Panthers got off to a slow start on Saturday and were never able to dig out, losing to the Eckerd Tritons 74-59 in women’s basketball Sunshine State Conference clash. Markeema Crawford was the only Panther in double figures with 12 points. She also had four rebounds, two steals, and one assist. DeLise Williams had nine points, with Kailyn Ebb putting up eight points to go with five rebounds and two steals.

“We got outplayed in every possible way,” said Panthers coach John Reynolds. “We never ran an offense, we never cut hard, we never executed.”

The Panthers shot 36 percent from the field, going 18-for-50 for the game and 4-of-10 in a first quarter that saw them get outscored 25-11. Eckerd was an impressive 6-of-8 from the field, including four three-pointers. Many of those shots were uncontested.

“We didn’t guard anybody in the first quarter,” said Panthers coach John Reynolds. “We played absolutely no defense. Nobody talked and all we did was chase people.”

Florida Tech (2-4, 1-2 SSC) bounced back a bit in the second quarter, outscoring the Tritons 14-9, thanks in large part to a 7-0 run after Eckerd scored the first two points of the quarter. Williams made a free-throw and Ebb made two and got a layup after she reeled in an offensive rebound that made it 27-18. The Panthers went into the half, down 34-25.

The third quarter saw a two-minute scoring drought by each team, but once the Panthers got going, they reeled off six unanswered, sparked by an Amanda Allen steal. Tanease Richardson sank three free-throws and Crawford hit a jumper and get a steal on the defensive end. With the score 34-32, Eckerd scored to make it a four-point game. A layup by Ebb and a free-throw from Cheyenne Scott made it a 36-35 game, with 4:37 to go in the period.

“The third quarter we played hard,” Reynolds said. “There was a timeout and we talked about making a run, but your natural instinct is to relax because you’re back in the game and when you’re relaxing the other team is gonna make a run and they came out and made two three’s in a row.”

The Tritons (7-1, 3-1 SSC) kept the Panthers at arm’s length all through the fourth, thanks to early three’s from Whiteye and Dallas Dickerson, giving the visitors a comfortable 59-43 lead with 7:37 left and clamped down from there.

Wednesday against Lynn, the Panthers were 21-of-38 from the free-throw line. Things did not improve in this game, as they went 20-of-33.

“Free-throws killed us,” said Reynolds. “You cannot tell me that that’s concentration and focus. There’s not a kid on this team that challenges themselves on a consistent basis to be able to challenge a teammate to meet that energy level.”

As the conversation with Reynolds continued he said that there’s only one thing he can control and that is who sees the floor. The effort and all the intangibles that go with this game are up to the players. He did not mince words for sure and there is a good likelihood that starting spots will be up for grabs, as the Panthers get ready to face Warner University on Tuesday night.

The game against the Royals is scheduled to tip at 5:30 p.m. at the Clemente Center in Melbourne.