Florida Tech basketball center R.J. Coil did not get to end his senior season the way he, or Florida Tech coach Billy Mims wanted it to end, but that does not take away from what he accomplished during his time with the Panthers.

“For his three years here, I think he goes down as one of the best big men to ever play here,” said head coach Billy Mims. “At 6’10, 260 pounds with the numbers he put up inside and his field goal percentage and rebounding, there’s no doubt.”

Coil was limited to just 17 games in 2018-2019 due to a shoulder injury, suffered while going after a loose ball in a game against Palm Beach Atlantic on January 19. He left that game with 13:48 to go in the second half, having pulled down 11 rebounds.

Out of high school, Coil signed with Division I Marist College and was a redshirt there his freshman year. He did not see any game action. After the one year there, he transferred to Schoolcraft Junior College in Detroit, Michigan, leading them to the National Tournament in 2015-16.

“I went up to watch him play in the tournament and the first time I saw him play, I was in love with him,” said Mims. “He was a perfect fit for Florida Tech, not just as a basketball player but also as a student.”

Mims spent three days at that tournament watching Coil practice and play and then flew him down to Florida Tech for a visit.

“I can remember it like it was yesterday,” said Mims. “His dad came with him and they looked around, liked what they saw and we signed him. His first year here (2016-2017), he had to pla 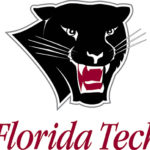 y behind Corbin Jackson and come off the bench. When Corbin graduated, R.J. became our man in the middle and as a junior, he averaged a double-double for the entire season.”

At the start of this season, Coil was well on his way to accomplishing that feat again and had found a three-point shooting touch. In November, he was shooting 71 percent from behind the arc. Add to that the fact that he was one of the nation’s leaders in rebounding, and field goal percentage from the floor, it was setting up to be a magical senior season.

On February 27, the Panthers celebrated Senior Night and as you might expect, the celebration was tempered a bit by the fact that Coil, being the teams’ only senior was not able to play in the game.

“In my 37 years, this is the saddest Senior Night I’m ever gonna have,” he said. He’s an incredible individual, I think the world of R.J. and his family. “He’s been a stellar player, a stellar teammate, and a stellar student.”

He was, of course, honored before the contest against Rollins, but not having him on the floor was tough for Mims.

Mims believes that after Coil has the surgery on his shoulder, if the shoulder heals the way it should, that Coil has a very good chance of playing in Europe and as he put it, “getting to see the world a little bit through basketball and expand his horizons.”

“No matter what happens, whether he plays or doesn’t play, he’s going to be great in life,” Mims continued. “He’s a coaches dream. Not only is he big, not only is he talented, but he’s never, ever had a negative word to say. He’s a positive individual and I’m gonna miss him, I’m gonna miss him when he leaves our program, but forever he’s a member of Panther Nation now and will always be a part of my extended family.”